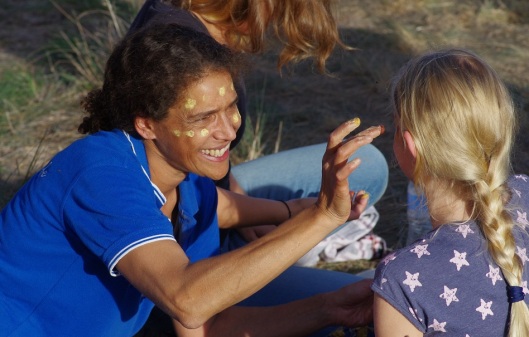 A family day on the northern grasslands of Victoria with more than 200 people sharing culture, stories, bush tucker and bush knowledge. Held at the Trust for Nature property “Wanders Plains”, near Quambatook, this event was part of Reconciliation Week. An excellent occasion, on a balmy Autumn afternoon and early evening.

With apologies to Leonard Cohen.

The North Central Catchment Authority held their third annual Science Forum at Koondrook on Saturday. A quartet of authoritative speakers presented the latest research and identification tips on wetland bird species, together with an outline of the “Flooding for Life” program. This is an environmental watering project, part of the Living Murray program, for areas used by colonial wetland birds on Gunbower Island.

An interesting aspect of the New South Wales research was the role of irrigated rice in providing breeding habitat for the critically endangered Australian Bitten. In mid NSW, in the rice growing district of Coleamberly at least half of the rice farms randomly sampled had Bitten breeding pairs. The bird appear to show a preference for crops, over combine sown rice. Possibly because the aerial sown fields are inundated for both a longer period of time, and earlier in the growing season. Ironically combine sowing of rice has been developed in recent times as a water conservation measure.

There was also a higher incidence of breeding birds in paddocks that had some patch’s of cumbungi. Organic rice crops may provide additional benefits, particularly because of the lack of insecticide use. However this aspect has not yet been researched. The Bitterns chicks appeared to be successfully raised well before the rice crop was harvested, and appear to spend some of their early life foraging in the rice crop, and along the check banks.

Unlike ducks, which feed directly on the growing rice crop and trigger aggressive deterrent measures, the Bittans were a welcome visitor to rice fields. The development of a Bittan conservation program could be very attractive to the rice industry, as a counter balance to its current poor environmental image. There is potential for incentives that would encourage the inclusion of “Bittern Bay’s” in rice plantings.

Despite bring very well sated by the lavish catering of Koondrooks “Long Paddock” cafe, the audience remained alert and engaged, with a wide range of questions to the presenters. Finley the day culminated in the launch of the NCCMA’s comprehensive glove box guide to wetland birds of northern Victoria.

The tropical Pacific Ocean has warmed steadily in recent months, with large warm anomalies in the ocean sub-surface (5-day values up to +6 °C) and increasingly warm sea surface temperatures. Climate models surveyed by the Bureau suggest El Niño development is possible as early as July. These factors indicate that while El Niño in 2014 cannot be guaranteed, the likelihood of an event developing remains at least 70% and we are at El Niño ALERT level.

For El Niño to be established and maintained, coupling needs to occur between the tropical Pacific atmosphere and ocean, evident by further and persistent weakening of the trade winds and a consistent increase in cloudiness near the Date Line. These atmospheric characteristics of El Niño are forecast to become evident over the coming months.

El Niño impacts climate across much of the world, including below average rainfall in the western Pacific and Indonesian regions, and increased rainfall in the central and eastern Pacific. For Australia, El Niño is usually associated with below average rainfall over southern and eastern inland Australia, with about two thirds of El Niño events since 1900 resulting in major drought over large parts of the continent.

The Indian Ocean Dipole (IOD) is currently in a neutral state. Model outlooks suggest the IOD is likely to remain neutral through late autumn and early winter, with two of the five models surveyed suggesting a positive IOD may develop by early spring. Positive IOD events often coincide with El Niño and are typically associated with large parts of southern and central Australia experiencing lower rainfall than usual.